August 2017 solar eclipse and the USA

« The Total Solar Eclipse of August 2017 will be remembered, especially for North American people since its shadow will cross the United States from West to East. See below. August solar eclipse and Trump

From an astrological perspective, this eclipse is not negative since the Sun and the Moon will form a Grand Trine in Fire with Saturn in Sagittarius and Uranus in Aries. As a consequence, its powerful energy will impact all people who have awakened and know that a better world is in the making, that will guide them to step to a higher level of consciousness in their personal and professional lives.
Jupiter in Libra, up until now slowed by its opposition to Uranus, will receive then the support of Saturn in Sagittarius as well as the support of Mars in Leo, which confirms what I had written in a previous article back in April, concerning the end of Daech. As we know, the territories conquered by IE have substantially shrunk and its main leaders have been eliminated. But let’s not get too excited, as Peace will remain fragile as long as Jupiter in Libra is Square to Pluto (Up until fall), not to mention Venus in Cancer is going through the consequences of it desires of freedom from its Square to Uranus and Opposition to Pluto. This is why, in spite of all hopes of Peace, dramatic events are hurting us, whether we like it or not: war or global warming refugees, are not going to end overnight. However, the fact that Mars is conjunct to the North Node makes me think that confidence and courage to fight for ideals is back in people’s heart. 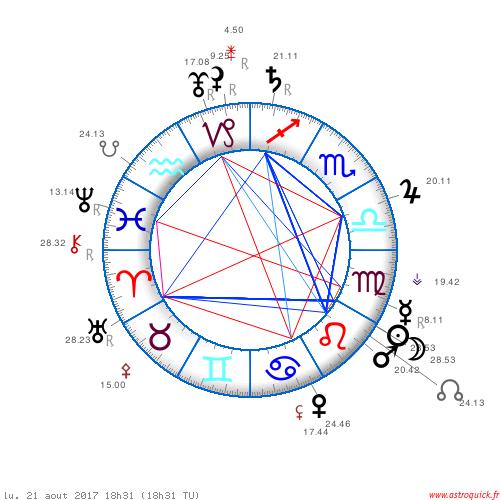 I found that nonetheless this eclipse will impact the United States but it will impact his President. I couldn’t help working on the synastry of both charts: Eclipse and Donald Trump. As you can see below, many points of contact between Trump’s chart (inside the circle) and the Eclipse’s chart (outside the circle).
We can note that the Sun and Moon of the Eclipse are on the President’s rising sign and Mars in house XII. His bold Mars expressed through impulsive tweets and his aggressive political style will not stop. At the very moment of the Eclipse, Venus will conjunct his natal Venus and Saturn in Cancer while Saturn transits again his Moon and South Node. In this difficult context, the President’s family situation might worsen. Well, it has started with his son being involved with meeting a Russian agent during the presidential campaign in 2016. I might also say that his relationship with his wife are not good at all… 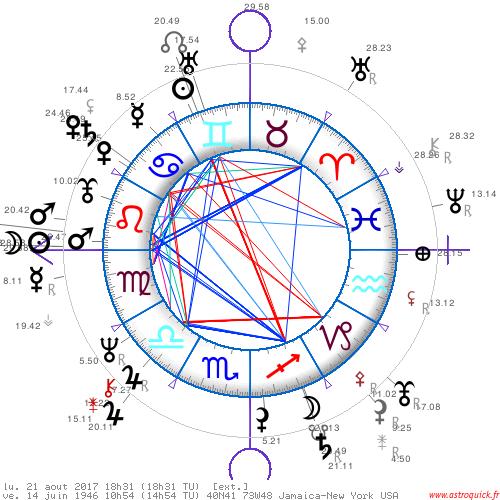 In spite of these difficulties, he should gain momentum and get some credit about his actions towards terrorism with the help of the Fire Trines from Uranus and Saturn. Although he likely might go too far and slide downhill, with an impact on American people. Remember that his Moon is in House IV, which symbolizes family. For an elected President, House IV also represents the nation.
With Saturn coming back on his Moon and South Node (up until November), Trump might become so unpopular that he could probably face destitution. Will he learn then to smooth off the rough edges?…

Unless American people will have to face a bigger challenge. According to Ptolemy, se effects of an Eclipse appear three months after its crossing. It happened in France with the Total Eclipse of August 11, 1999. In December the country faced two very powerful and destructive storms who followed the trajectory of the Eclipse’s shadow cone. I want to believe that the positive aspects from the Sun and Moon will protect the American people.

It is very important to emphasize that the power of this Eclipse is a huge Ascension Portal for souls who are ready. The astronomical configuration that precedes this Eclipse looks very much like a preparation to shift to a higher level of consciousness:
The New Moon in Leo on 7/23 in conjunction with Sun and Mars Squaring Uranus. Despite the beautiful and powerful Trine of Saturn/Uranus/Mercury in Fire we can feel the tension of this configuration. It is going to be an intense New Moon, especially for people born in the first degrees of Leo, Scorpio, Taurus and Aquarius. As the Sun rules Leo which symbolizes the ego, I would advise for the fixed signs to be more humble, patient and work on their temper. This planet’s alignment might very well support the uprising of the people against their leader as we can already observe it in Turkey and Venezuela. 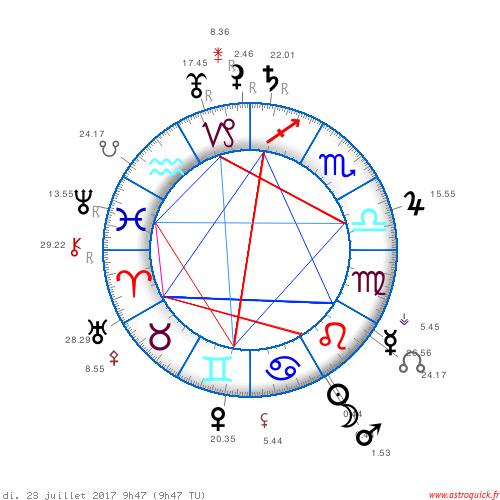 The New Moon of 7/23 is followed by a Full Moon on 8/7 with a Partial Moon Eclipse. Nothing bad but seriously, when you take a look at the chart, no need to be an astrologer to feel the tension that emanates from it. Tensions with the Sun conjunct Mars, opposing the Moon and Uranus Semi-Square Neptune. A lot of confusion to expect with the Opposition Mercury/Neptune, not to mention the exact Square Jupiter/Pluto that could compromise the Law and the Banks. The good news is the Trine between Saturn in Sagittarius and the Moon in Aquarius which clearly shows that the New World is here. Going back would activate resentments and old schemes that are for ever obsolete. 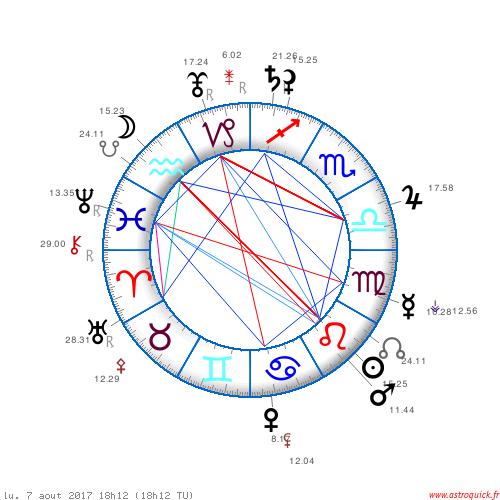 This is why I am very hopeful that this 8/21 Portal will boost to the Ascension process, especially as the Sun will enter in Virgo, sign of harvests. Many ascending souls will feel that they have to make important choices concerning their future and start using their CO-CREATING powers at a conscious level. This Eclipse and Portal are an excellent “Starting-block” for all who want to join the New World movement.

In conclusion, and for now, let’s be grateful for Mother Nature, our beautiful Planet, and Life.

May Love and Light be with you. » 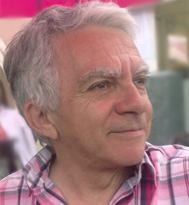 Patrick Giani is a well known French astrologer, writer, speaker, teacher and healer.
He has published many books. He is also the author of all horoscopes at 3horoscopes.com